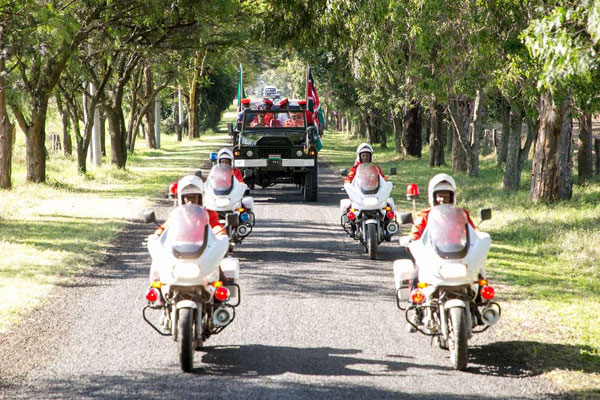 The former President was lowered into the grave as the Kenya Defence Forces fired 19 cannons in honour of the man who led the country for 24 years and ensured it remained stable in the midst of turmoil all across Africa. As the cannons were fired, KDF fighter jets performed a flypast.

Addressing thousands of mourners at Kabarak University grounds where the funeral service was held, President Kenyatta said he considered Mzee Moi as a father, a teacher and a mentor who was close to the Kenyatta family since the passing away of Kenya’s founding father Mzee Jomo Kenyatta.

“We shall miss him and the greatest gift that we can give him is to emulate him in the things that we do everyday. May the Almighty God give this giant of Africa eternal rest and peace until we meet again,” the President eulogised.

President Kenyatta said the Government will work with the family of the late former President to ensure the completion of projects initiated by Mzee Moi including a referral hospital in Kabarak for all mission hospitals in the region.

He announced a government plan to set up a solar power plant from which funds will be drawn to finance the completion of the referral hospital.

Deputy President William Ruto said Mzee Moi will forever be remembered for his passion for education that saw him expand access to education for all Kenyans.

“Kenya today prides itself as having one of the best work force because Mzee Moi invested in education to give Kenya the most educated human resource not only in East Africa but also on the continent,” Dr Ruto said.

He said Mzee Moi also takes credit for making the Kenya Defence Forces the most professional disciplined force on the continent.

Former Cabinet Minister Sally Kosgei who also at one time served as the Head of Public Service and Secretary to the Cabinet in the Moi administration described the former Head of State as a leader who was very skilled in statecraft.

She narrated her experiences with the former President saying Mzee Moi was a forgiving statesman, strict timekeeper who never tolerated leakage of government secrets.

The family of Mzee Moi eulogised him through poems and tributes by his children and grandsons led by his sons Raymond, Phillip and Gideon.

Earlier, Mzee Moi’s body was airlifted from Nairobi by the military arriving at his Kabarak home shortly after 8.00am.

The body lay in repose until 10.00am when the burial service led by the African Inland Church kicked off. Mzee Moi’s body was lowered to the grave at 4.30pm to mark the end of a series of elaborate state funeral ceremonies.

Career Opportunities at the African Union