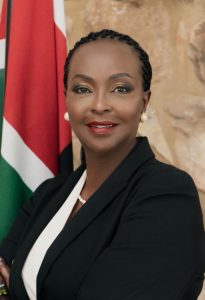 Amb. Jean Njeri Kamau is Kenya’s Ambassador to the Federal Republic of Ethiopia and the Permanent Representative to the African Union since January 2021.

Ambassador Kamau began her career as the Executive Director at the Federation of Women Lawyers Kenya (FIDA Kenya) from 1992-2000. Upon leaving FIDA Kenya, Amb Kamau served in various executive positions in the public sector and civil society working with organizations such as Womankind Worldwide and ActionAid International.

Some of her notable achievements include: enhancing multilateral relationships between South Africa and Kenya in the areas of Basic Education, Trade and Investment and Immigration; leading the Public Complaints Standing Committee (Ombudsman) as well as writing several publications centered on women’s rights.