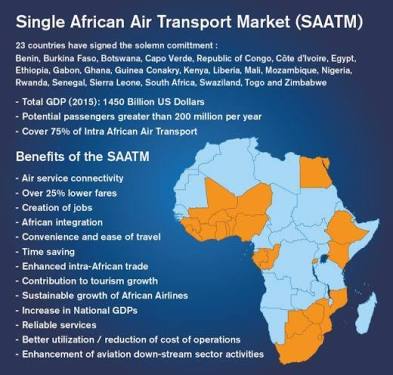 The International Civil Aviation Organisation (ICAO) has hailed the official launch of the Single African Air Transport Market (SAATM), noting that it represents a historic milestone for Africa and Africans.

The President of the ICAO Council, Dr Bernard Aliu, made the statement while addressing African leaders at the 30th African Union (AU) Summit in Addis Ababa, Ethiopia.

The SAATM is a flagship project of the African Union Agenda 2063.

“And by steadily enhancing regional and global connectivity continent-wide, air transport has continued to foster economic growth in Africa in terms of enhanced travel and tourism and other vital trade activities.”

“Let us acknowledge, therefore, that with this launch of SAATM, we are taking together a very major step in enabling the Yamoussoukro Decision’s fuller potential, and in concretely advancing the implementation and objectives of the AU Agenda 2063.

“Certainly, the 23 States which have signaled their early participation in this new market will be reaping the initial and quite significant socio-economic benefits it will help to deliver,” he said.

According to him, the SAATM will also foster the realisation of Agenda 2063 and the attainment of the UN Sustainable Development Goals adopted under Agenda 2030.

He noted that increased African air travel demand must be commensurate with expansion and modernisation of Africa’s airport and air navigation systems infrastructure.

He further urged them to integrate aviation development planning into their national development and foreign economic cooperation platforms.

“No fewer than 24 international airports in Africa will be saturated and unable to handle more traffic in just two years’ time,” he stressed.

Aliu also underscored ICAO’s continued support to States in Africa and around the world through its `No Country Left Behind initiative`, the Global Plans it sets out for Aviation Safety, Air Navigation Capacity and Efficiency, and most recently Aviation Security.

He reiterated that ICAO, as the UN specialised aviation agency, would continue to play a leadership role in ensuring that aviation growth brings greater socio-economic benefit to Africa, its citizens, States, industries and economies at large.

“We have taken great strides together in cooperating more successfully on a number of air transport and sustainability priorities, and by continuing to work together through ICAO, even greater growth and prosperity await the African continent in the years ahead,” Aliu said.