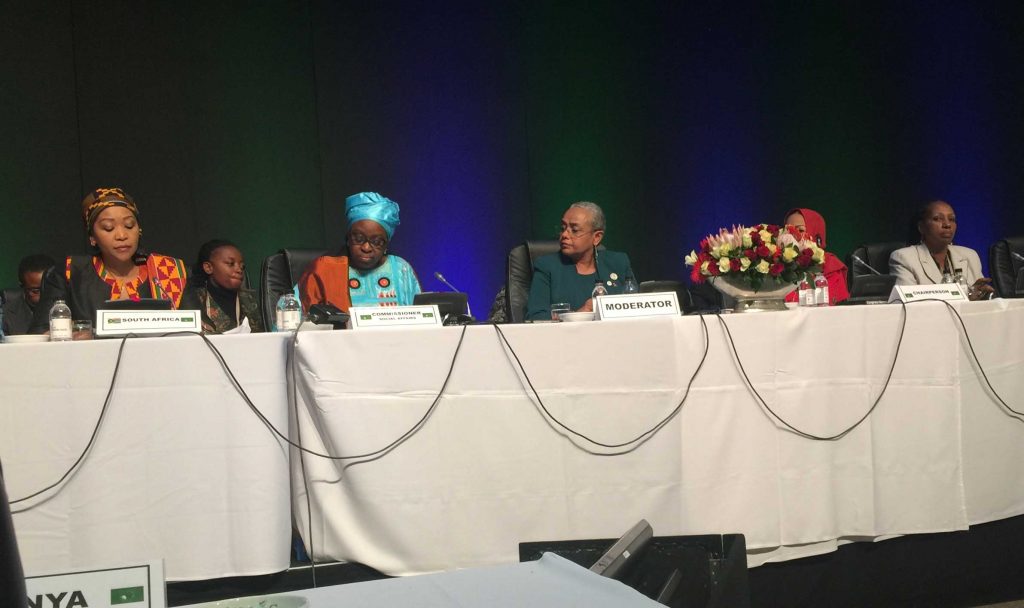 The Organization of African First Ladies against HIV/AIDS (OAFLA) at its 15th Extraordinary General Assembly in South Africa held from June 14-15, 2015 elected H.E. the First Lady of the Republic of Kenya to represent the Eastern Region in the Steering Committee of OAFLA for the next two years.

The 15thExtraordinary General Assembly which met under the theme of “Enhancing partnerships to end AIDS by 2030 and to empower women in their sexual and reproductive health and rights” deliberated on issues of partnerships particularly on the impacts existing partnerships have had on the activities of the First Ladies and opportunities to expand partnerships with potential partners with which discussions have already been initiated.

First Lady Margaret Kenyatta effectively participated at the OAFLA Assembly including moderating a Session, presented her country report and milestones in undertaking her work. She equally took the opportunity to invite the First Ladies to participate at the 9th Conference to Stop Cervical, Breast & Prostrate Cancer in Africa from 19th -21st July 2015 in Nairobi Kenya.

OAFLA elected H.E. Lordina Dramani Mahama of Ghana as the next OAFLA President and H.E Gertrude Mutharika of Malawi as Vice President of OAFLA in accordance with the OAFLA Constitution which states that the organization elects its president every two years. In her speech, the outgoing President of OAFLA H.E Madam Hinda Deby Itno of Chad appreciated all the support that she received during her presidency and asked all involved to work as diligently with the new President and her team to ensure success of the organization.

On the occasion, OAFLA launched the 4th edition of the members directory with its core partner, UNAIDS and deliberated on current priorities. Mrs. Rosemary Museminali, the UNAIDS Representative to the African Union & Economic Commission for Africa  indicated that the Directory was a critical communication tool not only to showcase the work of African First Ladies in their respective countries but to share best practices and build partnerships. She also commended the First Ladies on expanding their engagement to End AIDS by 2030 by committing to launch a regional campaign on the All In initiative to end AIDS among adolescents and youths.

Partner organizations present at the General Assembly also expressed their commitment to join OAFLA in addressing common concerns and priorities.UNFPA Executive Director, Dr. Babatunde Osotimehin expressed UNFPA’s commitment to work with First Ladies to ensure every women and adolescence has access to Sexual Reproductive Health service that they need because “when women are empowered they not only build themselves but their communities and their countries and they are the future of Africa”.

Mr. Mark Dybul, Executive Director of the Global Fund to Fight AIDS, TB and Malaria said that OAFLA has been voicing for the last 13 years that the focus should be on people and not on a specific disease or issue. He expressed global fund’s commitment to OAFLA saying “Global Fund is your servant and you are the leaders, make us do it”.

African First Ladies made the commitment to work with UNAIDS and its co-sponsors, including UNICEF on the All In Initiative, recognizing that targeted and comprehensive programs to reach young women and adolescent girls is a crucial component of fast-tracking for an AIDS free generation and leaving no-one behind.