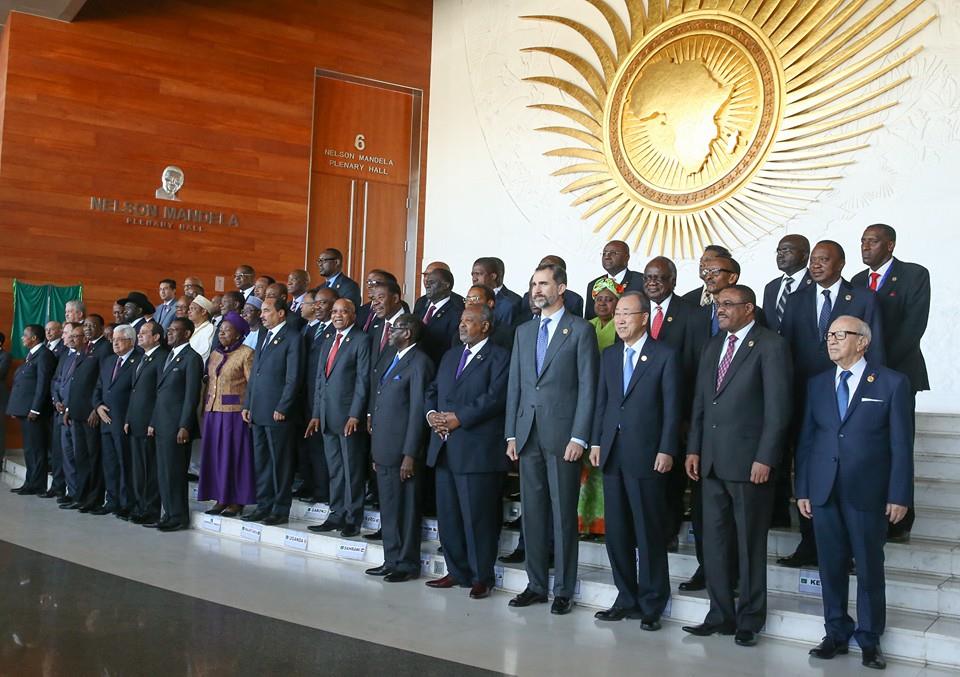 His Excellency Uhuru Kenyatta, President of the Republic of Kenya led the Kenyan delegation comprising of Ministry of Foreign Affairs and International Trade, Ministry of Planning and Devolution, Ministry of Energy, Ministry of Finance and National Treasury, Attorney General Office, NEPAD Kenya Secretariat, National Assembly and Senate at the 24th Ordinary Summit of the African Union from 30th to 31st January 2015

Prior to the Summit, there was 26th Ordinary Session of the Executive Council and the 29th Session of the Permanent Representative Committee held from the 26-27 and 23-24 respectively. The summit was held under the theme: “2015 Year of Women’s Empowerment and Development towards Africa’s Agenda 2063”.

Some of the key highlights of the outcome of the Summit included Decision on the Progress Report of the Commission on the Implementation of Previous Decisions on the International Criminal Court (ICC) in which the Assembly commended President Uhuru Kenyatta for the leadership demonstrated and the unprecedented act of appointing the Acting President so as to respect the Court Summons and protect the Sovereignty of Kenya.

The Assembly equally noted with concern that that the case against the Deputy President William Samoei Ruto is still proceeding before the International Criminal Court reiterating to the ICC the imperative need to terminate its prosecution against the Deputy President as per the previous decisions. The Assembly urged the African State parties to continue to speak with one voice to ensure that African proposals to the amendments to articles 16 and 27 of the Rome Statute of the ICC are considered by the Assembly of State Parties Working Group on amendments as well as by the forthcoming sessions of the Assembly of States Parties to the Rome Statute.

The 24th ordinary Summit also saw the adoption of Agenda 2063 and the first ten year implementation plan including the following Flagship projects geared towards promoting integration in Africa: Integrated High Speed Train Network; Great Inga Dam; Single African Aviation Market; Outer Space; The Pan African E-Network; Creation of an Annual African Consultative Platform; Establishment of the Virtual University; Free Movement of Persons and the African Passport; The Continental Free Trade Area; Silencing the Guns by 2020; Development of a Commodity Strategy and establishment of the Continental financial Institutions, including the African Central Bank by 2030.

On the Ebola virus disease (EVD) outbreak, the Assembly recommended the extension of the mandate of the African Union Support to the Ebola Outbreak in West Africa (ASEOWA) and called upon Member States to lift all restrictions imposed on Ebola affected countries; requested the international financial institutions and partner countries to cancel the debt of the three affected countries (Guinea, Liberia and Sierra Leone) and approved the recommendation to urgently convene a Global Conference on the Ebola epidemic by the Commission in liaison with all stakeholders as well as appealed to the scientific community to accelerate the search for a vaccine against Ebola.

On the Establishment of the African Centre for Disease Control and Prevention (African CDC), the Assembly expressed satisfaction for efforts made by the Commission to speed up the process for the establishment of the Centre by mid-2015 and approved that the coordination office should initially be at the Headquarters of the African Union in Addis Ababa. The African Union Commission was authorised to undertake the mobilization of funds from Member States, development partners and the private sector who have already indicated an interest and with experience in the domain.

Regarding the Report of the High Level African Trade Committee (HATC) on trade issues, the Assembly reaffirmed its commitment to launch continental free trade area negotiations in June 2015 and mandated the Chairperson of the HATC in collaboration with the Chairperson of the Commission to engage in high level consultations for the establishment of the CFTA.

On the World Trade Organisation (WTO), the Assembly urged Member States to identify key issues in the post-Bali work programme that facilitate the achievement of Africa’s strategic structural transformation and regional integration agenda.

On African Growth and Opportunity Act (AGOA), the Assembly called upon AGOA-eligible countries to enhance the advocacy to complement the efforts of the African Group of Ambassadors in Washington, USA towards the reauthorization of AGOA.

On Africa’s engagements at the UN climate summit and lima global Climate Change Conference (COP2O/CMP 10), the Assembly requested the Commission to facilitate the implementation of the WPCCAA and put in place a mechanism for follow up and regular reporting to the Summit on its implementation; and the AMCEN and AGN to take into account the WPCCAA in their negotiations and engagement with other partners in the climate change processes and for a. It approved the recommendation that a Troika comprising the outgoing, current and incoming presidents of AMCEN be the coordination mechanism of CAHOSCC.

President Uhuru Kenyatta presented the fifteenth report of the Committee of Ten Heads of State and Government on the Reform of the United Nations Security Council on behalf of President Ernest Bai Koroma of Sierra Leone. The Assembly reiterated its call for Africa to continue to speak with one voice and cohesively on all issues relating to the United Nations Security Council reform and related matters while ensuring that the interest of Africa are maintained and safeguarded at all times in the on-going Intergovernmental Negotiation on Security Council reform.

On the Report of the High Level Committee on the Post 2015 Development Agenda while acknowledging that negotiations by the global community has entered a critical phase noted that continued strategic engagement is necessary to facilitate the evolution of a Post-2015 Development Agenda that is compatible with Africa’s development objectives;

The Assembly equally supported decision to use the proposal from the OWG on the Sustainable Development Goals (SDGs) as the main basis for negotiations as it captures the essential elements of the Common African Position (CAP) priorities and should not be reopened for further discussion. The Assembly endorsed the formation and the Terms of Reference of the African Group of Negotiators on the Post 2015 Development Agenda which shall be the single negotiating body acting on behalf of the continent

On the Alternative Sources of Financing the African Union, the Assembly recommended a proposal of a non-exhaustive and non-binding basket of options, at national, regional and continental levels, building on the reports of H.E. President Obasanjo and the ministerial Working Group of the CAMEF from which Member States may choose from, on the understanding that Member States preserve their sovereign rights of adding new options/measures deemed convenient to them.