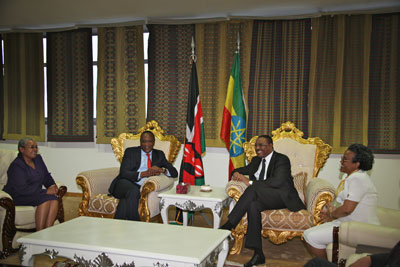 On 10th March 2014, H.E. President Uhuru Kenyatta began his four- day state visit to Ethiopia. Being his first state visit to Ethiopia the president was accorded the full state ceremony after which he was hosted to state banquet by the Prime Minister of the Federal Democratic Republic of Ethiopia. The visit is aimed at boosting bilateral relations as well as economic and commercial links between Kenya and Ethiopia. On the 11th March 2013, President Uhuru Kenyatta met with President Mulatu Teshome at the Jubilee Palace . The two Presidents noted that the warm diplomatic relations between the two countries dating back over many years continued to grow from strength and to strength. President Kenyatta emphasized that the strong bilateral relations between Ethiopia and Kenya in the areas of political diplomacy and security should be extended to trade and investment. President Mulatu underlined the growing activities of the two nations in helping to provide peace and security in the region. He also urged Kenyan investors to invest in such highly lucrative areas as textiles, garments, leather and leather products and agro processing in Ethiopia. President Kenyatta said his delegation included a large number of business representatives and it demonstrated Kenya’s keen interest to strengthen its trade and investment relations with Ethiopia. President Uhuru Kenyatta and his delagation having bilateral talks with the Prime Minister of Ehiopia.

He then held bilateral talks with Prime Minister Hailemariam Desalegn that focused on among other things regional peace and security as Kenya has been playing a key role in the search for a lasting solution to the South Sudan conflict and the restoration of stability to Somalia, Energy, infrastructure, including the Lamu Port and South Sudan-Ethiopia Transport (LAPSSET) Corridor project, launched in March 2012. In the evening, the President met with Kenyans living and working in Ethiopia at the Sheraton Hotel in Addis Ababa in a colourful ceremony that saw him mingle freely with the young Kenyans who graced the occasion and sang the national anthem in Kiswahili. In her address, Ambassador Catherine Muigai Mwangi took the opportunity to welcome the Kenyans and introduced herself as the Ambassador to the Federal Democratic Republic of Ethiopia and Permanent Representative to the African Union, IGAD and UNECA being her first address to Kenyans working and living in Ethiopia and urged for cooperation and synergies in sustaining the gains made and exploring more opportunities for engagement. During the visit higher management of the Metals and Engineering Corporation’s (METEC) explained that the Corporation is also engaged in designing and erecting whole manufacturing factories and plants as part of its bid to build industrial capacity of the country in various areas of the manufacturing sector. It is worth noting that METEC is currently carrying out the designing, manufacturing of production machineries and construction of plants of a number of sugar factories and a state of the art fertilizer factory.

The state visit was preceded by the senior official meeting held from 6th to 7th March 2014.The meeting assessed the progress made since the 34th Session of the Joint Ministerial Commission held in Nairobi between 20th – 21st November 2012. The review was crucial to the evaluation of the implementation of the Memoranda of Understanding and agreements of the JMC in order to upscale the efforts to realize the aims of the joint cooperation.

Kenya-Ethiopia cordial relationship dates back to Mzee Jomo Kenyatta time when they agreed to secure the borders of the two countries. Sharing a common border also means the two countries have much in common including the people that live on cross-border. Kenya and Ethiopia are traditional allies since independence and have a defence pact that was signed soon after Kenya’s independence. The two countries have however been at different trajectories in economic approaches with Kenya being more open society compared to Ethiopia. Over the years the two countries have closely related on matters security and this is attested by the cooperation under the Intergovernmental Development (IGAD) where peace, security and development have been addressed closely.
Some of the exemplary bilateral relations that exist between the Kenya and Ethiopia include the Special Status Agreement, joint efforts to develop infrastructure and strengthen the Intergovernmental Authority on Development (IGAD) and the Joint Border Commissioners and Administrators meeting that have been successful in addressing common border security challenges including ethnic conflicts, cattle rustling, contraband trade and other border related matters.