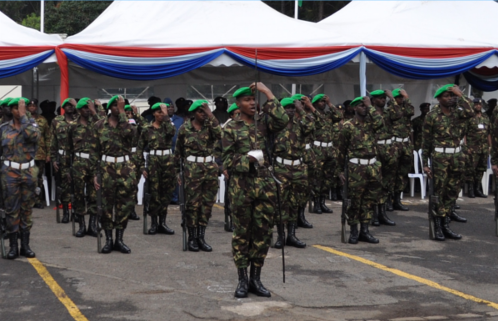 On 6th July 2012, the Department of Defence Headquarters was host to the symbolic ceremony to mark the full integration of the Kenyan forces into AMISOM. This came months after the formal integration of the KDF into AMISOM, which was effected by the African Union Peace and Security on 5th of January 2012 and endorsed by the United Nations Security Council vide UNSC Resolution 2036 of 21st February 2012.The Kenyan soldiers are now part of an enlarged AMISOM force that includes Burundi, Djibouti and Uganda. In attendance at the colourful historic ceremony was Lt Gen. Guti, the AMISOM Force Commander, Ambassador Boubakar Diarra, Special Representative of the chairman of the African Union Commission for Somalia, Ambassador Mahiga, the Special Representative of the Secretary General to the United Nations to Somalia, General J. Karangi Chief of the Defence Forces of the Republic of Kenya and other senior military officials from Africa. Amb. Diarra,AU Special Representative to Somalia receives the match past salute from the Kenyan contingent of the AMISOM forces

Also in attendance were high level political leaders including Hon. Yusuf Hajji, the minister of Defence of Kenya who noted that Kenyan engagement in Somalia emanated from its strong commitment to its obligation to contribute to regional and international peace and security. He reiterated that Kenya’s engagement in Somalia is motivated by its desire to create a stable and conducive peaceful environment for enhancement of development. He also praised Kenya for contributing immensely to the reduction of piracy in the Indian Ocean and thanked AMISOM member countries for their efforts and sacrifice in bringing an everlasting peace in Somalia.

On his part, General Karangi, the Chief of Kenya Defence Forces noted that the event marked KDF’s formal rehatting to AMISOM having transitioned from Operation Linda Nchi following the decisions of both the AU PSC and UN Security Council resolution 2036. Noting that the KDF had liberated close to more than 100,000 km2 since the launch of Operation Linda inchi, the General indicated that KDF had also taken to providing humanitarian assistance in the form of medical assistance and feeding old and weak Somali people. This has shown that KDF is not an occupational force and its intention was to liberate innocent Somali people. He urged the Kenya people not to forget the gallant officers, men and women who have lost their lives in defending this country. Amb Mahiga addressing the Kenyan contingent during the re-hatting ceremony. Looking on are the Minister of Defence, Deputy minister of defence, Amb. DIarra and Gen. Karangi (to his immediate left)

On his part, Ambassador Boubakar Diarra thanked Kenyans and the Government for responding to the union’s invitation to join AMISOM, noting that the entry of KDF into Somalia and successes were a game changer, leading to the great improvement in the security terrain of that country.  He also noted that the African Union acknowledged Kenya’s immense contribution in Somalia, noting that it enabling the expansion of the AMISOM mandate.