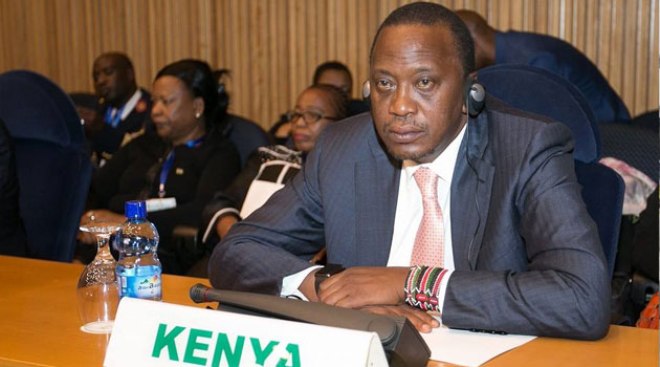 President Uhuru Kenyatta has called for a review of the mandate of the African Mission in Somalia (AMISOM) to change its rules of engagement as it fights to eradicate terrorists in Somalia.

The President also called for more resources for the forces in Somalia so that AMISOM can have robust power on land, air and the sea.

He said it was sad that the forces deployed in Somalia to face terrorists and hardened criminals lacked air and maritime components in a country that has a coastline of more than 3000 km.

President Kenyatta, while addressing the African Union Peace and Security Council, said AMISOM has made gains from the time it deployed forces in Somalia but now was the time to change gear and allow the soldiers in Somalia to root out the terrorists to enable the Federal Government of Somalia to recover the entire territory.

“The objective was to support the Federal Government of Somalia to recover the entire territory of Somalia by 2015, in time for the 2016 general elections. It is clear that this objective has not been achieved and it points to the need to vary the mandate of AMISOM,” the President said. “In order to achieve this strategic objective, AMISOM requires a reviewed mandate to enable its troops match the changing tactics,” said the President

President Kenyatta said terrorists were changing tactics and security forces in neighbouring countries as well as AMISOM should take necessary action to stay steps ahead.

He said Kenya managed to foil many planned terror attacks after it established inter-agency modalities that enable security forces to detect and destroy terrorist plans.

The President said the mutating threat of the terror attacks facing the region became evident this month with the attack of the AMISOM base with troops in Somalia.

He said that while terrorism was a global problem, the attack showed that Somalia was an arena of terrorism.

“In order to fight it therefore, all of us must continue the difficult and daunting task of identifying, separating, tracking and deterring the enemy wherever they may be found,” said the President.

President Kenyatta presented the Peace and Security Council with a five-point recommendation.

First, he sought a review of AMISOM mandate to match Al Shabaab’s mode of warfare.

Second, he wanted the Peace and Security Committee to ensure that AMISOM fully deploys troops in their respective areas of jurisdiction especially Gedo region in Sector 3 and review the sector allocations.

Third, he wanted the AU should ask that the UN and international partners provide the necessary force multipliers to AMISOM for better operational capabilities.

And Fifth, President Kenyatta  said it was imperative to provide resources to provide housing, jumpstart livelihoods and offer support for initiatives that increase productivity in liberated areas in order to create pull factors and accelerate the return of refugees in to Somalia.

The President also spoke on the situations in South Sudan and Burundi. He called on the leaders in South Sudan to be honest in implementing the peace accord they entered into. He at the same urged the AU to put pressure on the warring sides to opt for peace.

“I am optimistic that this Council will come up with decisions that guarantee humanitarian access to affected populations and exert the necessary leverage to all parties to invigorate implementation of the Peace Agreement,” said the President.

The Peace and Security Council (PSC) meeting was in two parts. The first part was attended by all Presidents and dealt with the issues of terrorism and South Sudan.

The second session was attended by Presidents of the countries that are members of the PSC and went late into the night.