President Kenyatta returns to Kenya after a successful AU Summit 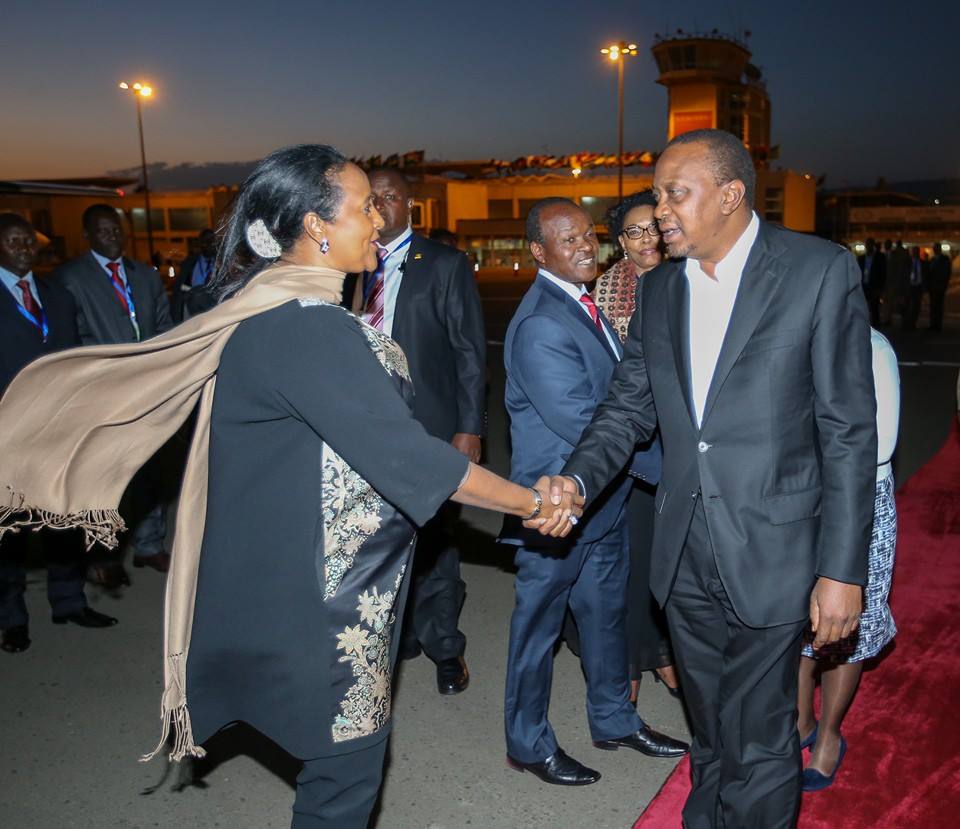 President Uhuru Kenyatta jetted back into the country after the close of the 26th African Union Summit during which the status of Africa’s relations with the ICC and regional security concerns were given priority.

During the Summit, President Kenyatta rallied the Heads of State and Government to adopt far-reaching proposals on the International Criminal Court, which included the development of a road map for a mass withdrawal from the Rome Statute.

The President also pushed for the AU to refocus on how to strengthen the African Union Mission in Somalia (AMISOM) so that the force can deal better with the terrorists threatening the entire region.

The AU also tasked the African Union Group at the United Nations to engage the UN Secretary General on who will become the new UNEP director. Three candidates from Africa are vying with Kenya lobbying for the Permanent Representative to the UN, Ambassador Macharia Kamau, to become the new director of UNEP, which has its headquarters in Kenya.

The AU Group at the UN has also been directed to engage the UN Secretary General on the membership of the UN International Law Commission with Kenya lobbying for Senator Amos Wako to become one of the members of the commission.

On Sunday, the President held bilateral talks with the President of Guinea, Mr Alpha Conde, who requested Kenya’s support in developing his country’s tourism sector.

President Conde requested Kenya to support Guinea with skills and knowledge to expand the economy of Guinea.

President Kenyatta assured Kenya’s readiness to support Guinea and announced that a team of Kenyan officials will soon be dispatched to the West African country to assess the areas where Kenya can offer assistance.

President Conde thanked Kenya for the role it played in rallying Africans to come to the aid of West African countries to control the Ebola disease.

Earlier in the day, President Kenyatta attended a meeting hosted by President Paul Kagame of Rwanda to discuss the Smart Africa initiative, aimed at promoting ICT as a driver for socio-economic growth. President Kenyatta stressed that Kenya is committed to support the initiative and will soon post an official to the headquarters of SMART Africa in Kigali, Rwanda.

President Kenyatta held another meeting with the President of the African Development Bank, Mr Akinwumi Adesina, to review the bank’s work in Kenya.

President Kenyatta and Mr Adesina discussed the bank’s support for infrastructure development, which is at the heart of Kenya’s development.

The President also held a bilateral meeting with the President of Djibouti, Mr Ismail Omar Guelleh, on issues of mutual interest for the two countries including security.

On Saturday, President Kenyatta met with Ban Ki-Moon, to discuss the role of AMISOM in Somalia and the need for a review of the mandate of the forces battling al shabaab terrorists.

The President also held a bilateral meeting with Namibian President Hage Geingob to discuss trade relations between Kenya and Namibia.

On Friday, President Kenyatta chaired a special summit of the African Peer Review Mechanism (APRM) during which he got commitments from Heads of State and Government that Africa will revitalise the peer review process for better governance.

The President, who was accompanied by First Lady Margaret Kenyatta, arrived at the Jomo Kenyatta International Airport after 9.00 p.m.

Deputy President William Ruto and other senior Government officials received the President at the airport.