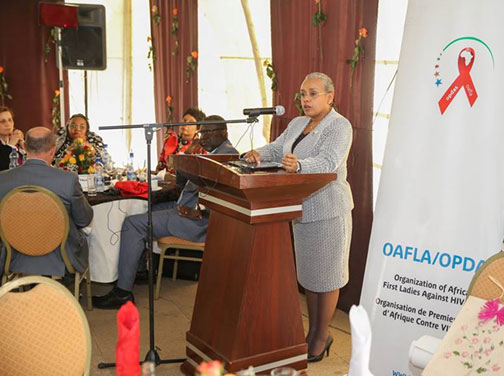 The First Lady of the Republic of Kenya, Margaret Kenyatta participated at the 14th Ordinary General Assembly of the Organization of African First Ladies against HIV/AIDS (OAFLA), which was held on the sidelines of the recently concluded African Union Summit. The General Assembly was held under the theme: “Enhancing partnerships to create an enabling environment to achieve: the end of AIDS by 2030 and to empower women in their Sexual Reproductive Health and Rights”. First Lady Margaret Kenyatta while addressing members of the Organization of African First Ladies against HIV/ AIDs (OAFLA) at the working luncheon on eradication of Polio on the sidelines of the OAFLA called for concerted regional efforts for the total eradication of the debilitating polio virus in East Africa. She said that polio is one of the vaccine-preventable diseases that for many years continues to cause high child mortality, not only in Africa but in the whole world.

She noted with appreciation that since 1988 when the Global Polio Eradication Initiative was started, the number of cases has fallen by over 99 percent. She said this great milestone in polio eradication could not have been achieved without the commitment of the various countries, governments and stakeholders.

The First Lady said the government has been very supportive of the polio eradication agenda and child survival programs in general. The country started the Expanded Programme on Immunization (EPI) in 1980 and has since registered admirable results. “The programme was so successful that four years later in 1984, we eradicated indigenous polio and remained polio-free for 22 years”, said the First Lady. She however said Kenya reported four imported outbreaks of polio between 2006 and 2013 that resulted in a total of 36 cases of the wild polio virus. “These outbreaks were promptly addressed and the country has not reported any polio case for the last 18 months since July, 2013”, she added.

Mrs. Kenyatta reiterated the need to ensure the refugee population in the region is polio free adding that the three cases reported in Kenya occurred in Daadab refugee camp. She said Kenya will continue to provide leadership in all critical areas of Health including strengthening immunization systems, surveillance, resource mobilization and investment in programmes that help reduce maternal, neonatal and child mortality.

The First Lady was praised and congratulated for her efforts and determination in completing the 42-km London marathon in her campaigns to raise funds for the Beyond Zero campaign, an initiative that aims at saving the lives of mothers and children. The First Lady has been emphatic that no mother should die while giving life and all children should be able to enjoy their childhood and successfully go through the stages of adolescence to maturity. African First Ladies have pledged to work in partnership with African Union Commission, various UN agencies including UNAIDS and UNFPA and other development agencies like the International Planned Parenthood Federation (IPPF) and the private sector including Alere Inc to improve the lives and health of African women . The First Ladies have committed to raising awareness and high level political commitment and country ownership for Africa’s social and Health Agenda, including eliminating mother-to-child transmission of HIV (EMTCT) and delivering on the promise of an AIDS-free generation, women empowerment and SRHR.