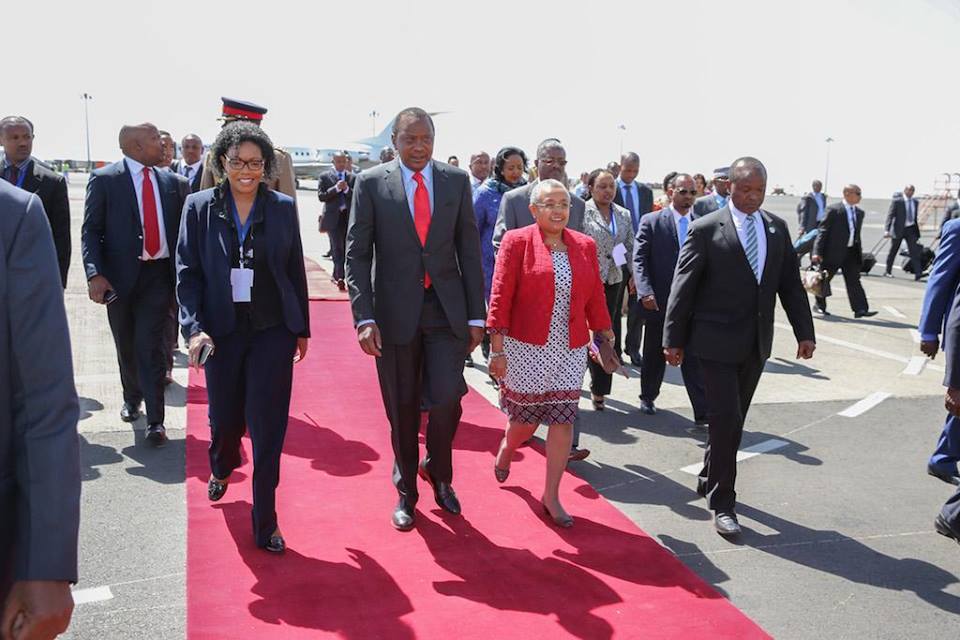 H.E. the Ambassador of the Republic of Kenya to Ethiopia Catherine Mwangi welcomes H.E. Uhuru Kenyatta and First Lady Margaret Kenyatta as they arrive in Addis Ababa for the 24th Ordinary Session of the AU.

President Uhuru Kenyatta has arrived in Addis Ababa to join other African leaders for the Heads of State and Government of the African Union summit that takes place at the AU head-quarters in Addis Ababa.

President Kenyatta is accompanied by the First Lady Margaret Kenyatta who will be attending the Organization of African First Ladies Against Aids (OAFLA) General Assembly on the sidelines of the AU.

The President is accompanied by a strong Kenyan delegation led by Foreign Affairs and International Trade Cabinet Secretary Amina Mohammed, who arrived earlier to push for the Kenyan agenda at the Summit, key among the push for Africa to establish an African based court to handle judicial matters in the continent. “We (Africans) have better ways to develop our own judicial mechanisms. We need to build capacity for own our mechanisms” said Ms Mohammed when she briefed journalists at the AU headquarters.

The AU Assembly is a semi-annual meeting of the heads of states and government where most important decisions of the 53-member state are made. The AU Assembly brings together all the African States except Morocco which is not a member of the union.

The theme of this year’s summit is : “2015 Year of women’s Empowerment and Development towards Africa’s Agenda 2063”. Preparatory meetings ahead of the Heads of States summit have been going on in Addis Ababa since January 23rd.

Other key issues lined for discussion include the establishment of the African Centre for Disease control and prevention (viewed against the recent Ebola crisis), peace and security in Africa and alternative sources of financing the African Union.

Besides the AU and IGAD meetings, President Kenyatta is also expected to hold a series of bilateral meetings with other leaders including the UN Secretary General Ban Ki-moon on matters of mutual interest.

Statement By H.E. Hon. Uhuru Kenyatta On The...