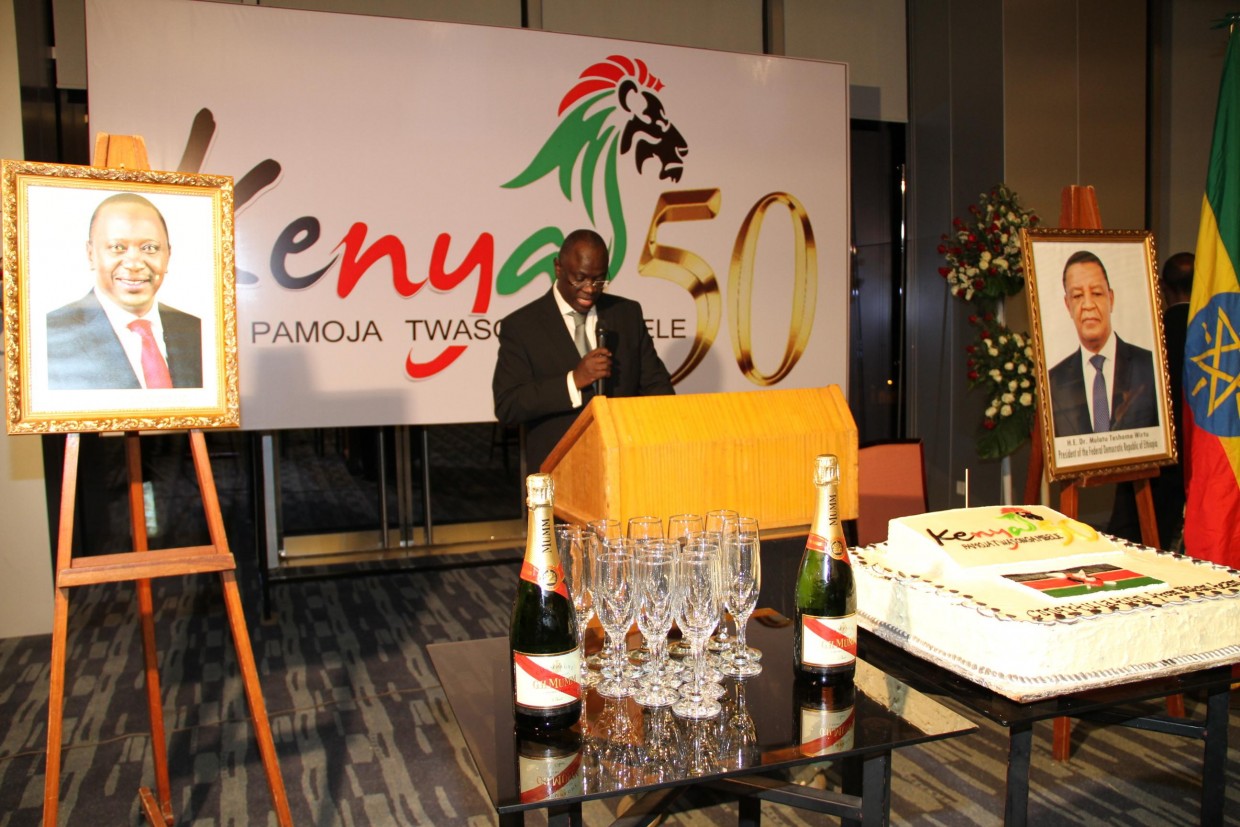 Amb. Christopher Chika led Kenyans and the International Community residing and working in Addis Ababa to a momentous occasion marking 50 years of independence He paid tribute to Kenyan heroes who struggled for independence and bestowed on Kenya a legacy of a united and proud country.

In his message, the Ambassador outlined the significance of this auspicious occasion for Kenya, as well as urged Kenyans to stand together and build the motherland. He reaffirmed the commitment of the mission to continue working with Kenyans in the two countries as well as Headquarters in improving services to all and in pursuit of Kenya’s foreign policy at the regional and continental levels. Amb. Chika, the chief guest Ato Shiferaw Shigute (l) and group of African Ambassadors toast to the prosperity of Kenya

Reflecting on the history of Kenya as an independent country, he noted that Kenya is fortunate to have reached fifty without serious threats to its statehood. The scorecard for those 50 years demonstrates that the objectives of the founding fathers have largely been attained and there are many achievements that make Kenyans proud of themselves.

He reiterated that Kenya has enjoyed peace and stability over the years, including enduring the troubled cold war period when the continent became embroiled in inter and intra state conflicts. This he attributed to the able and pragmatic leadership that Kenya has had, the peace loving nature of the Kenyan people and the hand of the Almighty whose grace has been more than sufficient.

He noted that the politics of Kenya has been competitive and progressive making Kenya a thriving democracy with a free market economy. The economy has emerged from the turmoil of the 1990’s to register a growth rate averaging 5 per cent per annum for the past 10 years. This growth is driven by a vibrant private sector that has spread wealth, resulting in a steady expansion of the middle class and a gradual reduction of the number of Kenyans living in poverty. Amb. Chika and group of Ambassadors cutting the Jamhuri Cake

The ambassador took the opportunity of his message to express gratitude, congratulations and good wishes to the sons and daughters of Kenya that are engaged in Operation Linda Inchi . The full text of the Ambassador’s message can be accessed in the section under resources speeches for H.E Ambassador

On his part the Chief Guest Hon Shiferaw Shigute Minister for Education of the Federal Democratic Republic of Ethiopia lauded the milestone of Kenya at Fifty citing cordial relations between Kenya and Ethiopia spanning many years.

He underscored the fact that Kenya and Ethiopia share rich history and the proximity of the two countries has further enhanced the cordial relationship. He took the opportunity to commend Kenya for peace and stability in the region and urged for experience sharing in areas of comparative advantage between the two countries.

The Minister then toasted to the prosperity of the Kenyan People and wished the audience a merry Christmas and prosperous 2014.