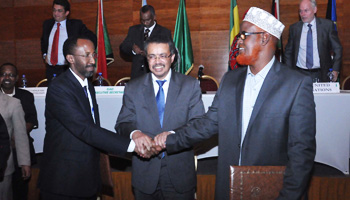 The Federal Government of Somalia and the representative Jubba region signed an Agreement on Wednesday 28 August 2013 establishing the Interim Jubba Administration that lays down the principles upon which the two parties will work under the Provisional Federal Constitution of Somalia. The agreement is crucial in that it settles one of the key hurdles in the roadmap for the stabilization and pacification of Somalia. The Federal Government recognizes H.E. Sheikh Ahmed Mohamed Islaan popularly known as Madobe as the leader of the Interim Jubba Administration which is expected to become a full fledged Federal Member State of Somalia within the next two years. The Agreement also clarifies the respective roles of the Federal Government and the Interim Jubba Administration in the management of national and regional institutions and assets including the sharing of resources accruing from these.

The Federal Government and the Interim Jubba Administration shall jointly oversee the integration of armed militias into the Somali National Army in close co ordination with AMISOM. The responsibility for regional policing shall be under the Interim Jubba Administration.
Ambassador Christopher Chika of Kenya speaking on behalf of IGAD Member States welcomed the successful conclusion of the talks between the Federal Government of Somalia and representatives of Jubba Land and noted that political progress was key in ensuring long term stability for Somalia. He lauded H.E. Dr. Tedros Adhanom Ghebrey the Minister for Foreign Affairs of the Federal Democratic Republic of Ethiopia and the Chairperson of IGAD Council of Foreign Ministers and his negotiating team for their untiring effort in guiding the talks to a successful conclusion. Ambassador Chika also congratulated the two parties for the achievement and encouraged them to continue their consultations in building effective governing structures for Somalia in accordance with the Provisional Federal Constitution of Somalia.

Ambassador Chika pointed out that the signing of the Agreement opens the opportunity for arrangements for repatriation of Somali refugees to commence. He said that the Jubba Land process and the refugee issue are closely related and that the planned international conference on repatriation of Somali refugees to be convened by Kenya and the Federal Government of Somalia in association with other stakeholders was predicated on the success of the talks.

The Ambassador stressed that although there is a semblance of calm in Somalia it should not be forgotten that large parts of Somalia continue to experience a deteriorating security situation on account of resurgence of terrorist activities of the Al Shabaab. He called on the Federal Government of Somalia to work closely with the African Union and IGAD and focus its energy in defeating the real enemy of Somalia which is the Al Shabaab.

Ambassador Chika assured Somalia that IGAD Member States were committed to supporting Somalia in her recovery process including extending technical assistance and other forms of capacity building to the Federal Government of Somalia for sustainable stability, peace, recovery and development.