Amb. Christopher M. Chika participates at the AU Peace and Security Council briefing on the situation in Somalia 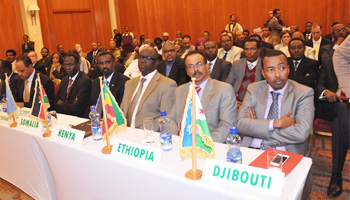 During a briefing on the situation in Somalia to the African Union Peace and Security Council (AUPSC) held on 26 August 2013, Ambassador Chika impressed upon the AUPSC to pay close attention to any commentary on Somalia that shapes decision making. The Ambassador expressed concern that despite the positive measures that Kenya has taken towards the stabilization of Somalia such as recapturing large tracks of land from Al Shabaab, including the port of Kismayu which was the Al Shabaab lifeline, providing essential services to the populations in the liberated areas in South Central Somalia and continued to support to the Somalia National Forces that are operating alongside Kenya Defence Forces there was an orchestrated, negative campaign levelled against Kenya by a segment of the international community.

The Ambassador urged the Council to reiterate its warning to spoilers who have the potential of derailing all the efforts towards turning Somalia around and uplifting the country to the next level in its rehabilitation.

Ambassador Chika also informed the Council about the negative effects of the blanket lifting of the arms embargo in Somalia. The Ambassador pointed out that although the lifting of the embargo was intended to create a capable Somalia National Security Force, unfortunately it did not provide the Federal Government of Somalia with the requisite capacity to counter the debilitating consequences, one of which is a flood of arms into the country.

He expressed concern that there was no accurate information on the flows of arms. The Ambassador expressed the fear that if the arms ended up with illegal militias and Al Shabaab then they will continue to sustain their terror campaigns. He also pointed out that private security firms some with doubtful character had become the preferred employer in direct competition with the Somalia National Security Force. The Ambassador warned that if the flow of arms continues unabated, it will undoubtedly jeopardize AMISOM operations and the general security in Somalia and it would be detrimental to the overall success of the road map to stabilize Somalia.

Ambassador Chika also highlighted the fact that a number of critical ports were still under the control of the Al Shabaab, making it impossible to impose, monitor
and fully implement some of the UNSC resolutions. He therefore called on the AUPSC to revisit the question of an AMISOM maritime component.

Referring to the meeting of the Heads of State and Government of the Troop Contributing Countries (TCCs) to the African Union Mission in Somalia (AMISOM), Ethiopia and Somalia that was held in Kampala Uganda on 4th August 2013, Ambassador Chika called on the AUPSC to endorse the outcome of the Kampala summit and extend support to its full implementation so as to minimize the threat against AMISOM troops and hopefully also lead to a cessation of negative propaganda directed at Kenya Defence Forces.

Ambassador Chika also reiterated the imperative for the return of the Somalia refugees from Kenya. He said that the return of the nearly one million Somali refugees was necessary to build a legitimate and stable Somali state into the future. Furthermore, it would also reduce the burden that Kenya has carried over two decades and also reduce the security threat that the refugee camps which have been infiltrated by Al Shabaab post to Kenya and its people.