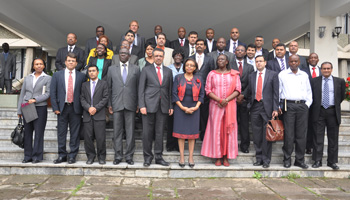 From the 29th to 31st July 2013, Kenya’s Cabinet Secretary for East African Community Affairs, Commerce and Tourism Mrs. Phyllis Kandie led a high powered delegation of investors to Ethiopia drawn from the Kenya Association of Manufacturers. The business gurus were on a fact finding mission to explore trade and investment opportunities in Ethiopia. They held Business-to-Business meetings with their counterparts from the Ethiopian Chamber of Commerce and Sectoral Associations (ECCSA) besides visiting Ayka Addis Textile factory and the Awash leather factory in Addis Ababa, Ethiopia.

The minister who was accompanied by the Chief Executive Officer of the Kenya Association Manufactures, Betty Maina, together with the investors also met various senior Ethiopian government officials including Prime Minister Hailemariam Desalegn, Foreign Affairs Minister, Tedros Adhanom, members of Addis Ababa Chamber of Commerce and Sectoral Organisations and officials of the Ethiopian Investment Authority.

The visit comes weeks after the signing of the Special Status Agreement between Kenya’s former President Mwai Kibaki and Ethiopia’s Prime Minister, Hailemariam Desalegn in Nairobi on November 2012. The Minister had earlier on 26th July 2013 been on a benchmarking mission of tourism and conference facilities in Ethiopia. The Minister, accompanied by a high powered government delegation from her ministry visited the New African Union Complex facility to witness firsthand the facility and was taken round by the AU Deputy Chairperson, Erastus Mwencha. On 27th July 2013, the Minister visited Kuriftu Resort and Spa in Debre Zeyt to see the caliber of conference and tourism facilities on offer in Ethiopia.

The minister also had an opportunity to visit the Ethiopian Commodity Exchange market where she was briefed by the Chief Executive Officer, Anteneh Assefa, on how it works and how they intend to move it forward to help farmers get a market and good prices for their produce. The Minister was highly impressed by the achievement of the Commodity Exchange market and promised to emulate the Ethiopian example in forming a similar exchange in Kenya.