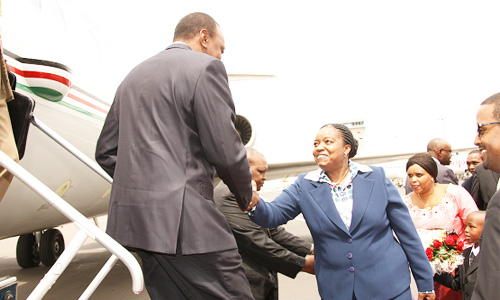 H.E President Uhuru Kenyatta attended his first summit of the Intergovernmental Authority on Development (IGAD), held in Addis Ababa, on 3rd May 2013. Taking place four days ahead of the London Conference on Somalia, on the day when the UNSC adopted resolution 2102 on the establishment of UNPOS was adopted, and against the background of the global consensus on the imperative to translate the opportunities presented by the recent gains to sustainable peace and development, the summit demonstrated the region’s unwavering support to the recovery of one of its members. Currently, Kenya is current rapportuer of IGAD.

In his statement, President called on stronger regional solidarity with Somalia at this critical time.  Because he argued, its sustainability is linked to that of the region.  In this regard, he urged the international community to act in a coherent and purposeful manner.  Underscoring that the fight against Al Shabaab was the singular strategic objective in the region, the President urged for all measures to ensure that the efforts undertaken in particular the lifting of the arms embargo do not precipitate acquisition of arms by terrorist or extremist elements.  He also called on the international community to engage with activities that facilitate the return and full participation of all Somalis, particularly refugees that are displaced outside the country, in the reconstruction of their country. In this regard, he indicated that Kenya, Somalia and UNHCR were working towards an international conference on the repatriation of Somali refugees from Kenya.

Kenya hosts the largest number of Somalia refugees, in the world’s largest refugee camps of Dabaab where more than 630,000 refugees have been hosted for over two decades. President Uhuru also pledged his full support for the strengthening of the IGAD secretariat and its programmes The Opening of the Summit

The successful summit reaffirmed the regional solidarity with Somalia, and agreed that all IGAD members would remain seized and accompany Somalia towards its full recovery.  The summit also evolved a common regional position that would guide engagement at the London conference.  (For the Communique of the meeting, see resource page)

Before the commencement of the official session, President Uhuru Kenyatta conferred with H.E Ato Hailemarian Dessalegne, the Prime Minister of the Federal Democratic Republic of Ethiopia, and current chair of the IGAD, as well as H.E President Hassan Mohammud who had visited him in Mombasa on 27th April 2013 H.E President Kenyatta led a delegation that included Prof Githu Muigai, Attorney General, Mr. Thuita Mwangi, Permanent Secretary in the Ministry of Foreign Affairs, H.E Monica Juma, the Permanent Representative of Kenya to IGAD, and H.E Josphat Maikara, Ambassador of Kenya to Somalia, among others.   The summit was preceded by a Council of Ministers and session of the Ambassadors to IGAD. President Uhuru is escorted to the Airport Lounge by Amb M Juma (l) and Ato A. Abdulkadir The summit in session