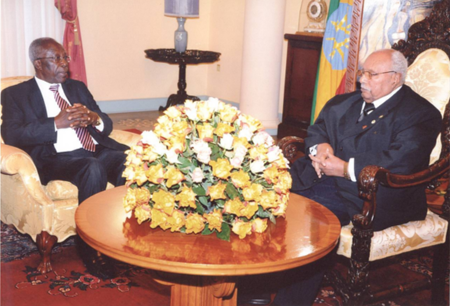 On 23rd August 2012, Hon. (Prof) Sam K. Ongeri, Minister of Foreign Affairs of Kenya arrived in Ethiopia to deliver President Kibaki’s special message of condolences to the family, government and people of Ethiopia. The minister met with H.E Wolde Giorgis, President of the Federal Democratic Republic of Ethiopia, to whom he expressed Kenyan peoples’ deepest sorrows at the untimely demise of His Excellency Prime Minister Meles Zenawi, a great friend of Kenya and a visionary leader who, until his death was a champion for the causes of the Ethiopians, the region and Africa.

The letter of President Kibaki read in part, “On behalf of the Government and the People of Kenya, I convey our deepest sympathies to the family of Prime Minister Meles Zenawi, the Government and People of Ethiopia following this devastating loss,” adding that “the late Prime Minister was a pragmatic and visionary leader who helped stabilize his country and placed it on the economic growth path.” On his part, President Wolde–Giorgis noted that Ethiopia would never forget that President Kibaki has sent the foreign minister to deliver his message at this time of sorrow. Minister Ongeri also met with Ato Hailemariam Desalegn, Acting Prime Minister of Ethiopia, to whom he delivered a similar message. At the meeting, Ambassador Ongeri expressed the shock of President Kibaki and the people of Kenya on receiving the news about the death of Prime Minister Meles. He noted that the Prime Minister had been instrumental in strengthening relations between Kenya and Ethiopia. Further, minister Ongeri extended the support of the government and people of Kenya at this difficult time and expressed Kenya’s commitment to continue with the realization of the Prime Minister’s legacy, to further strengthen the deep relationship between the two countries and to accomplish the work in progress between Kenya and Ethiopia. Ambassador Ongeri also expressed his full confidence that the new leadership would carry on the vision of the late Prime Minister and ensure a smooth transition.

Acting Prime Minister Hailemariam Desalegn thanked the Kenyan Foreign Minister for his support to Ethiopia at this time and expressed gratitude to President Kibaki for the manner in which his message had been delivered, noting that the presence of the minister was demonstrative of the Kenya’s solidarity with Ethiopia. The Acting Prime Minister noted that the late Prime Minister Meles was a statesman, visionary whose loss was a great one for Ethiopia and Africa. Noting that the Prime Ministers legacy would continue, Ato Hailemarian Desalegn assured Prof Ongeri of Ethiopia’s commitment to continue pursuing the policies and strategies set by Prime Minister Meles. Ato Hailemariam extended his thanks to the Government of Kenya on behalf of the government and people of Ethiopia. He also assured the Foreign Minister that Ethiopia would continue working closely with Kenya to ensure that the achievements made at the regional level, in Somalia and between Sudan and South Sudan, would not be reversed but would instead be maintained and expanded.

Professor Ongeri was accompanied to both meetings by Amb. Dr. Monica Juma, the Ambassador to Ethiopia, Ambassador Michael Oyugi, the Director, Africa Directorate at Headquarters, and other staff from the Embassy of Kenya in Addis Ababa.