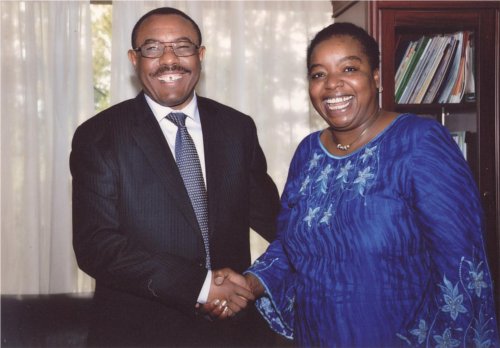 During the visit, the Deputy Prime Minister signed the condolence book in honour of the late Prof. George Saitoti, and the late Joshua Orwa Ojode Minister for Internal Security and Provincial Administration and Assistant Minister respectively who perished in a plane crash in Kibiku Forest in Ngong on 10th June 2012. The late Minister George Saitoti had a 10 months stint as the Acting Minister of Foreign Affairs of Kenya between 2010 and 2011. During this period, both ministers lead their respective countries’ delegation to the historic 33rd session of the Joint Ministerial Commission on 2nd June 2011, that has revitalized the bilateral relations between Kenya and Ethiopia.

The Deputy Prime Minister and H.E Dr. Monica K. Juma also held discussions on bilateral relations between Kenya and Ethiopia and regional issues of mutual concern. Noting the satisfaction of the Government of Ethiopia, with the progress achieved since the conclusion of the 33rd JMC session, the Deputy Prime Minister noted the positive pace of the progress in developments aimed to encourage trade and investment opportunities for the people of both countries.  On her part, the Ambassador briefed the DPM on the growing number of potential Kenyan investors that were exploring opportunities to invest especially in Agriculture in the southern parts of the country. The DPM undertook to pursue the matter with Ato Shiferaw Shigute – President of Southern Nations, Nationalities and Peoples Regional State (SNNPRS) with a view to facilitating such investment. DPM and Amb.Monica Juma in her office

On regional matters, the Deputy Prime Minister underscored the need for full understanding by all the actors of the situation in Somalia in order to deal with any possibilities or risks related to spoilers, particularly as we approach the end of the transitional period in August 2012.  Supporting the Deputy Prime Minister, the ambassador informed that both the recent joint African Union Peace and Security Council and European Union Peace and Security Committee meeting in Brussels at the end of May 2012, as well as the AU Peace and Security Council meeting with the United Nations Security Council meeting in New York on 13 June 2012 had called for cooperation of all countries working on the Somalia crisis and underscored the imperative of working within the regional mechanism.

The DPM was also introduced to the staff of the mission, with whom he interacted.