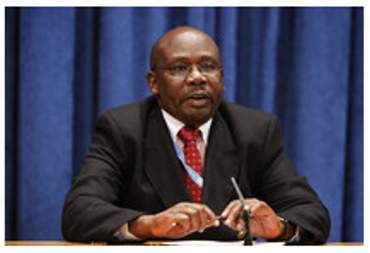 On 14th and 15th May 2012, African Ministers of Justice and Attorneys General converged in Addis Ababa to consider the review of the Statute of the African Court on Human and People’s Rights and the Protocol to the Constitutive Act establishing the Pan African Parliament (PAP). Kenya was represented at the meeting by Prof. Githu Muigai, Attorney General of the Republic of Kenya, who was elected to chair, and successfully steered, the two-day meeting to a successful conclusion.The Kenyan delegation also included H.E Dr. Monica K. Juma, Kenya’s Ambassador to the Federal Democratic Republic of Ethiopia, The Republic of Djibouti and Permanent Representative to the African Union Commission, Economic Commission for Africa and IGAD, and Mr. Christopher Chika, Head of Chancery, at the Embassy of Kenya in Addis Ababa.

The meeting further took stock of the progress made with regard to implementing the decisions of the African Union with respect to the International Criminal Court and a briefing on the on the progress made with respect to implementation of the various African Union Decisions on Universal Jurisdiction. In this respect, the meeting considered a Model law on universal jurisdiction and recommended its adoption by the African Union Summit. This will pave the way for its adaptation as part of national legislation by the Member States.
With respect to the ICC, the meeting underscored the need for Member States to place the interests of victims at the centre of all actions, including sustaining the fight against impunity, in line with Articles 4(h) and 4(o) of the Constitutive Act of the African Union. In this regard, the meeting also encouraged the African Union to publicize, within the continent, what it has done towards the protection of civilians in situations where international crimes have been perpetrated.Recognizing the need for African countries to contribute optimally to the evolution of the Court’s jurisprudence, the meeting encouraged Member States to seriously seek to enhance African representation at the bench of the ICC.Noting that there were several African States that were not parties to the Rome Statute, the meeting recommended that the AU seeks an Advisory Opinion on the question of immunities, under international law, of Heads of State and senior state officials that are not parties to the Statute.

The proposed amendments to the Statutes of the African Court on Human and people’s Rights will result in an expanded mandate of the court to include international and trans-national crimes. These include: genocide, crimes against humanity, war crimes, piracy, terrorism, mercenary, money laundering, trafficking in persons, trafficking in drugs, hazardous waste, illicit exploitation of natural resources and the crime against aggression. The court shall have three organs, namely: The Presidency; The Office of the Prosecutor and the Registry. It shall have both original and appellate jurisdiction. In addition to the above mandate, the court shall also hear such other matters or appeals as may be referred to it with respect to agreements reached among Member States. It shall also complement the protective mandate of the African Commission on Human and people’s Rights.

The meeting finally considered and adopted the draft amended Protocol to the Constitutive Act relating to the Pan African Parliament. The Draft seeks to strengthen the Pan African Parliament to ensure the effective participation of the African people in the economic development and integration of the continent. A further objective of the PAP is that it encourages good governance, respect for the rule of law, transparency and accountability among in Member States. It will achieve this through legislation of Draft model laws as shall be decide by the Assembly.

Membership to the Pan African Parliament under the proposed Protocol shall comprise of five Members elected by each state party, at least two of whom shall be women.