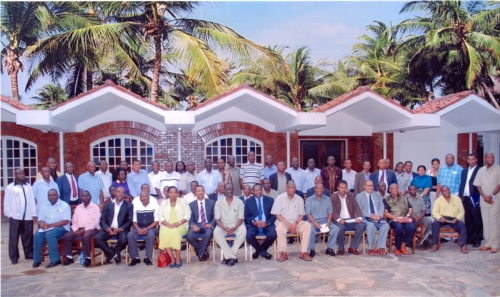 Between 30th April and 1st May 2012, the Government of Kenya, hosted representatives of the Government of the Federal Democratic Republic of Ethiopia to the 27th Kenya-Ethiopia Joint Border Commissioners/Administrators’ meeting at the coastal town of Mombasa, Kenya.  Bringing together nearly 100 senior level government officials from both sides, discussions focused on a wide range of sectors organized under two Sub-Committees; the Political and Security subcommittee and the Economic and Social subcommittee.

The Kenyan delegation, comprising of representatives from more than 10 ministries, was led by Mr. James Ole Serian, Provincial Commissioner, North Eastern Province, and included H.E. Dr. Monica K. Juma, Kenya’s Ambassador to Ethiopia among other senior government officials. Among the other Embassy officials in the delegation was Mr.  Richard Lemoshira, First Counsellor, who is the focal person for Trade and Investment, and Mr.Nathan Machani, First Secretary (Political). Signifying the importance of this relationship, the meeting was officially opened by Hon. Prof. George Saitoti, the Minister of State for Provincial Administration and Internal Security. Prof Saitoti lauded the warm and cordial historical relations that have existed between the two countries, which have laid a strong basis for mutual commitment to entrench peace and peaceful co-existence among the peoples of the two countries in general, and the border communities, in particular.

Among the key outcomes of the meeting was the reaffirmation by both sides to translate the strong commitment into efforts to boost cross border peace and security through strengthening of joint security measures.  Further, the two sides undertook to commence the inspection of the common border in May 2012 and to jointly rehabilitate border beacons; agreed to strengthen cooperation in Immigration matters and boost cooperation in customs management.

On Economic and Social areas, the two sides welcomed the decision of the two countries to sign a Special Status Agreement in order to strategically transform the bilateral relations. They agreed to establish the Joint Trade Review Committee to implement the Bilateral Trade Agreement signed in June 2011; to expeditiously establish the Joint Border Trade Committee, speed up negotiations towards conclusion of the Bilateral Trade Protocol; and to finalize the common list of commodities agreed under COMESA facilitated negotiations on the Simplified Trade Regime. On agriculture, the two sides agreed to set up the Joint Technical Committee to implement the provisions of the MoU on Cooperation in Agriculture Development signed in June 2011. Taking note of the livestock sector as the backbone of livelihoods of the border communities, the meeting agreed to conclude the draft MoU on Livestock Development to spur collaboration in the sector.

On shared water resources, each side expressed support for sustainable solutions to the challenges arising from climate change and exploitation of these resources as discussed at the Joint Ministerial Commission level.

H.E. Ato Shiferaw Shigute and Ambassador Juma also paid a courtesy call on Mr. Maina, the Provincial Commissioner of the Coast Province, and visited the Mombasa port, where he was received by the Managing Director. The teams also had a chance to visit the Heller Park, among other establishments.

The 28th meeting will be hosted in Adama, Ethiopia in 2012 on dates to be mutually agreed upon.