Prime Minister Meles Zenawi in Kenya for a State Visit 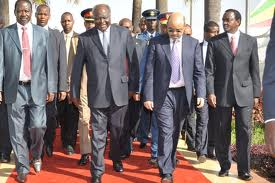 The Prime Minister of the Federal Democratic Republic of Ethiopia, H.E. Meles Zenawi, made his maiden state visit to Kenya between 1st and 2nd March, 2012 since he  took office in Ethiopia. President Kibaki receives Prime Minister Zenawi at the JKIA for a State Visit 1st March 2012,with him is the Vice President H.E Stephen Kalonzo and the Rt Hon. Prime Minister Raila Odinga .

Taking place at the peak of the Kenya-Ethio relations, the visit had a number of significant highlights. Since the 33rd Joint Ministerial Commission session that was held in Ethiopia in June 2011, Kenya and Ethiopia have concluded and signed a total of 10 Agreements and Memorandas of Understanding in areas of common interest.

The State visit provided a unique opportunity for the two leaders to review the status of bilateral relations between the two countries. Significantly they mandated several follow up areas, including work towards the rehabilitation of borders along the common borders; and modalities of strengthening the existing relations. Another highlight of the state visit was the signing of the Agreement on Cooperation in Railways, by the respective ministers of both countries, at State House Nairobi. Minister Amos Kimunya sign and exchange an Agreement on Railways cooperation between Kenya and Ethiopia.

Prime Minister Zenawi also visited the United Nations Office in Nairobi, where he held discussions with the Director General, Amb Zwede and planted a tree to commemorate his visit. The Prime Minister then visited the Ol Karia Geothermal Station in Naivasha, where he was received by Engineer Eddy Njoroge, the Managing Director of Kengen and staff.  At Ol Karia, he visited the generating station of the geothermal power.  He then visited the Kenya Agricultural Research Institute (KARI), laboratories in Westlands, Nairobi.