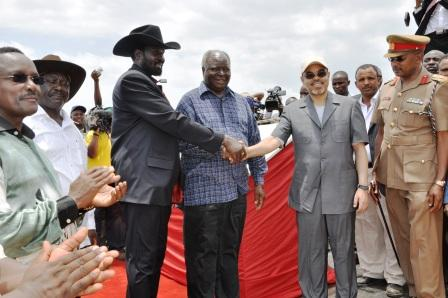 The Three presidents  shake hands to symbolise a unity of purpose in the project.

The port is part of the Lamu Port -South Sudan-Ethiopia (LAPSSET) project. Dubbed the most ambitious infrastructural undertaking on the continent, at an estimated cost of some $25bn, the project is a vital transport and economic development corridor for the region. Although it has commenced with three countries, LAPSSET is envisaged as a bridge that will link the Indian Ocean side of the continent to the Atlantic coast and to the north it links into the Northern Corridor into Djibouti, Sudan and Egypt.
The LAPSSET project comprises 32 port berths connected to the region by thousands of kilometres of new rail tracks, pipeline and a highway.  This corridor will also have 3 resort cities, a number of airports, and a manmade dam (the grand dam).
Among those  who witnessed this historic event was Amb Monica Juma and Amb Cleveland Leshore, Kenya’s Ambassaor to South Sudan, Ministers, Members of Parliament, including those from Lamu and other high level officials from the three countries.