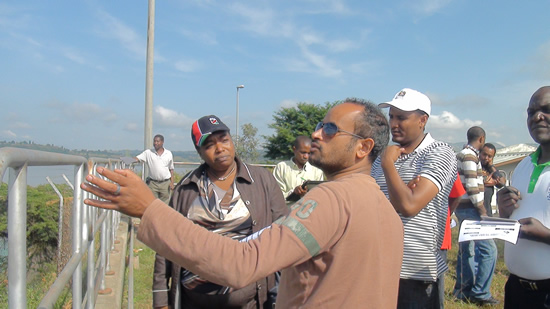 On the 8th and 9th November 2011, a team from the Kenya Embassy Addis Ababa an official visit to the Gilgel Gibe I, Gibe II and III, hydro-electic plants located in Southern Ethiopia on the Gil Gibe, Gibe and Omo River basin.

Engineer Ephrahim Wolde Kidan of EEPCO explains the mechanisms of the Gil gibe I Dam as Ato Nigusse Mamusha, the power plant manager and Mr. Cyrus Mutie, of the Ministry of Water look on.

After touring Gil Gibe I, the team visited Gibe II. Gil Gibe II is situated in two regional states, Oromia and the Southern Nation Nationalities and Peoples (SNNP). It is dependent on the outflow from Gil Gibe I.  Its intake is located 250km south west of Addis Ababa, 80 km North-East of Jimma town and the outlet and the powerhouse is in Yem Special Woreda of SNNP Regional State. The power plant is accessed by two newly constructed roads, Fofa town to GGII 35km long gravel road and Kose town to GGII Power Plant 38km long asphalt road. Although the power plant depends on the water coming from Gil Gibe I, it is able to produces some 440 MW becuase of the gradient created by a 26 km tunnelling of the water and a 250 metres fall at the power plant.

The mission team inside the power plantOn the 9th November 2011, the team travelled to and visited Gibe III. The Gibe III Hydroelectric Project is located in the Southern Nations Nationalities & Peoples Regional State in Wolayta and Dawro Zones at about 470 km south west of Addis Ababa on the road via shashemene. It is situated along the lower course of the Omo River, some 155 km downstream of the Gilgel Gibe II Powerhouse.

The Mission was led by H.E Amb. Monica K.Juma and comprised of Mr. Christopher Chika,  Mr. Richard Lemoshira, Mr. James Kibon, Mr. Nathan Machani , Mercy A. Odongo, Silas Mutie from Ministry of water and Mr Peter Gachie from the Office of the president.