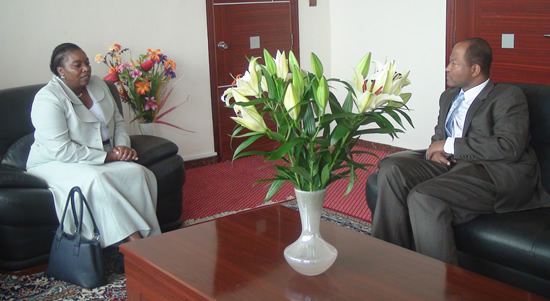 On 10th November 2011, Her Excellency Ambassador Dr. Monica K. Juma  paid a courtesy call on H.E Mr. Tagesse Chaffo, Vice President of the Southern Nationalities, Nations and Peoples’ Region (SNNPR) at the Headquarters of the Region in Hawasssa.  In their discussion, Amd. Juma noted the strides made in strengthening bilateral relations between Kenya and Ethiopia since she first called on H.E Ato Shiferao Shigutie, the President of the region, in February 2011.

The Ambassador in disucussion with Ato Chaffo, Vice President and Chair of the bureau on trade and investment

She took the opportunity to  highlight the successful 33rdSession of the joint Ministerial Commission, held in June2011 in which the two countries signed 3 key agreements; Bilateral Trade Agreement, Agreement on Agriculture Development and MOU on Cooperative Development and Transport services as well as an MOU on teh development, management and utilisation of the transport corridor.  There has also been progress in the energy sector which has seem the energising of the power line to Moyale Kenya.  Negotiations are ongoing to facilitate increase in cross border trade.

The Vice President informed that SNNPR has a population of 17Million, 347 Representatives comprising of 4 vice presidents in charge of Agriculture, Trade and Industry, Civil service  and the government representative to the parliament. In the light of the federal system provided in the Constitution of Ethiopia, SNNP has 14 zonal administrative units and 134 districts.

On Trade and Investment, he urged the need for increased trade and investment between the region, which is a neighbour of Kenya and expressed his strong desire to host Kenyan investors to explore the potential for joint ventures in agriculture, service industry like banks, and tourism among others.  In this regard, Vice President committed himself to host a forum for both business people in the next few weeks as well as welcome the proposal for the Kenyan team to come for benchmarking in devolution.