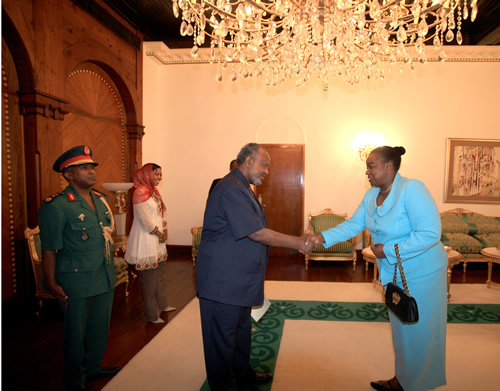 Amb. Dr. Monica K. Juma presented her credentials to H.E Ismail Omar Guelleh, President of the Republic of Djibouti, as Kenya’s next Ambassador Extra-Ordinary and Plenipotentiary to the Republic of Djibouti, at a solemn and colourful occasion that took place at the Presidential Palace, on Monday 28 November 2011.  For the full text of the statement of the Ambassador during this occassion refer to speeches and documents section.

Thereafter Amb. Juma hosted a reception for the diplomatic corps at the Kampinski hotel, Djibouti.  She also held bilateral discussions with various governments departments and agencies including with the Minister for Foreign Affairs, Speaker of the National Assembly, Minister for Education, Minister for Transport, the Chamber of Commerce, the investment promotion agency and the tourism board.